When websites had to adapt to different devices to make them mobile friendly many years ago – that seems so long ago now – a common solution was to instead of creating a new responsive site to cater for mobile devices but to create a separate version specifically for mobiles, called m.domainname.com.
Creating a responsive website has got a lot easier since then so there isn’t really any reason to use a m. version.
This month Google had a bug that displayed some m. domains in desktop search results, rather than just mobile search results. Since this bug was reported they have now said not to create new m. websites at all but instead create responsive websites.
Your current m. domains should be ok but iI would recommend changing sooner rather than later.

This month Google have released new link attributes to help webmasters inform Google what type of links they are. I won’t go into too this in too much detail here as there is a good table below from Moz that does a very good job. 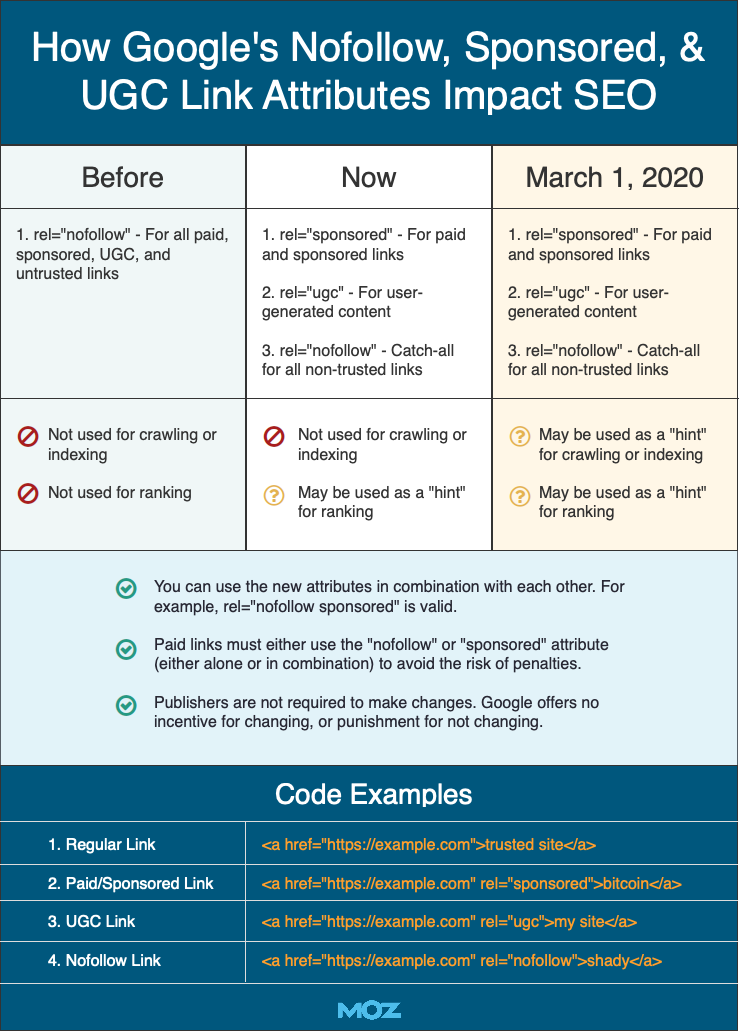 This month Google made changes to the type of reviews they will include in their platforms. What they are trying to do is stop self-reviews, fake reviews if you would like a Trump’ism.
Look into this if you use reviews on your site as there are new tags to add.
This change will also stop some 3rd party app reviews from being used.
Since this update, there has been a reduction of nearly 20% fewer reviews displayed in Google’s search results. Gulp!

Bye-bye!
Well, not really, its bye-bye to the old version of Google’s search console. Any tools not migrated over to the new version can be found in the menu linking you to them.
Also, the data in search console is now only a day old – sometimes there is the current day’s data too –  this is a big improvement following the increase of histroic data a few months back.

If you have an image on your website and someone copies the code so they can display your image on their website it is not considered a link.
They are basically stealing your image and using your bandwidth.
If this could be an issue for you Ii would look into blocking these images being displayed elsewhere.

Migrating to a new server

If you are thinking or just about to move your website to a different hosting company Google said that apart from slowing down crawling your site for a little time nothing else changes. Good news!

Thought I would provide you with some stats recently released which could be of help:

That’s it for this month, please share to anyone who you think would benefit from keeping up to date on SEO and online marketing in a brief easy to read report.